skip to main | skip to sidebar

Remember that time I found that baby owl and named it Billy?
I wrote this song to him and the little video I made of him matched up magically, Dark Side of The Moon/ Wizard of Oz style.

Sometimes my friend Clay Stinnett comes over with some drums and we jam out in the dome and I'll record it with a couple mics and a 4-track cassette recorder. I made this song out of part of one of those recordings. Then I made a jumbled lo-fi video for it. enjoy!

Posted by Daniel Huffman at 2:44 PM No comments:

I don't come to post on this blog space very much. IG is really where I post the most to keep people up to date. Here's another birdflower song I made with Brooke. The album is coming along and is very close to be finished. I took a break for a while to focus on New Fumes recordings. I came back to birdflower with fresh ears and made big progress over the past couple weeks. This is one of the songs, though a different version will be on the album.

Posted by Daniel Huffman at 2:33 PM No comments:

So I have this project called "Birdflower" with Brooke Kelty. Here is the first taste of the album!

Posted by Daniel Huffman at 6:47 PM No comments:

I woke up with this song in my head the other morning, though I hadn't heard it in several years. I decided to make my own version. The original song is by a Dallas band from the 90's called Bedhead. My old band Comet played some of it's first shows with Bedhead. Those were some really special times in my life. Some good memories. Check it out, Get the free download! 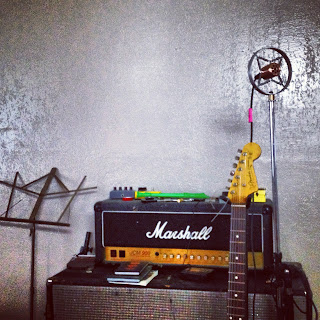 Posted by Daniel Huffman at 11:49 PM No comments: 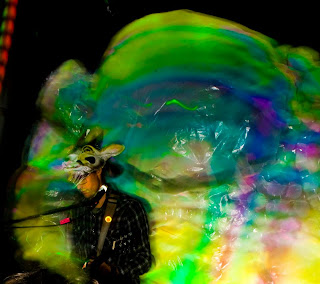 Wow, I have neglected this site for a while. Sorry about that, I've been on a wild ride. So much has happened. It's kind of a big blur to me really. Let's see... recording, playing, traveling, half living in OKC, half in Dallas, covering the King Crimson and Stone Roses debut albums with Flaming Lips and friends, playing the Yoshimi Battles the Pink Robots album with the Lips at SXSW, adding "Blob" to my live show, finishing a new album, deciding it's not finished and working on it some more, dealing with gender dysphoria/euphoria...on and on and on, man, what a trip.
Posted by Daniel Huffman at 1:25 PM No comments:

My friend Paul Baker made this video and used a bit of my music
Posted by Daniel Huffman at 11:15 PM No comments: 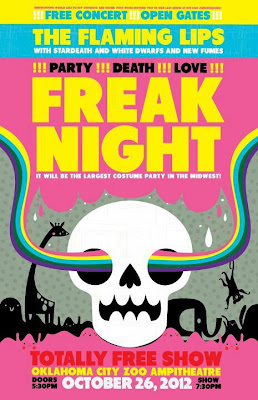 I found out about this event today (and that I am playing it) by getting a text with a picture of this poster!
Posted by Daniel Huffman at 9:49 PM No comments:

So much has gone on since my last post. There was a 24 hour tour, another pressing of Heady Fwends for the UK/EU, recording new material, mixing, working day jobs and not much sleeping... A few weeks ago I was asked by Wayne Coyne to record two songs from King Crimson's 1969 debut LP, In The Court of the Crimson King. The first being "Moonchild" and the second being "I Talk To The Wind". Both are such beautiful songs! I was told later to concentrate on "I Talk To The Wind" because a band called Spaceface from Memphis, TN would be working on "Moonchild". Linear Downfall had already recorded a version of "21st Century Schizoid Man" and Stardeath and White Dwarfs was working on another track from the same album, all of which would be compiled into a complete cover of the entire album that would include contributions from The Flaming Lips. Sounds fantastic to me! I told Wayne I was going to record both songs within the week, just for fun and because I really love both of those songs. So, after I would get done pouring Heady Fwends UK vinyl at A+R each day, I would go home and work on these songs. I really had a blast doing so! It was challenging figuring out some of the parts, but so worth the exercise! When I was done recording them in the Dome Home in Dallas, I took them up to Pink Floor studio in Oklahoma City to put the sessions in their computer to be sent off to be mastered. Before coming back home, I sat down and recorded Wayne singing on "Moonchild". I brought it home, mixed and tweaked a bit more and here you go... We hope you enjoy it! It's a free download, so get it, turn it up, share with your friends and keep an eye out for the whole album! This version may or may not be on the album, just so you know.
Posted by Daniel Huffman at 11:12 PM 1 comment: 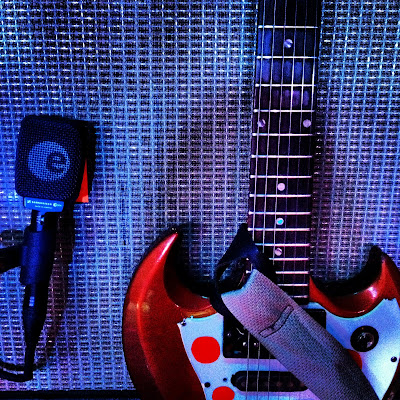 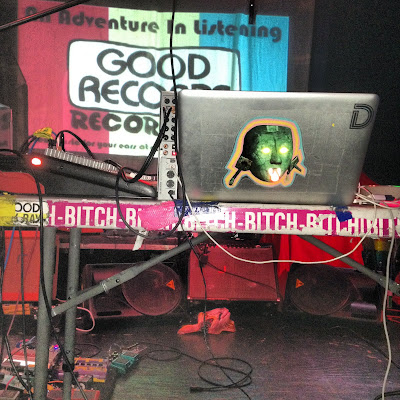 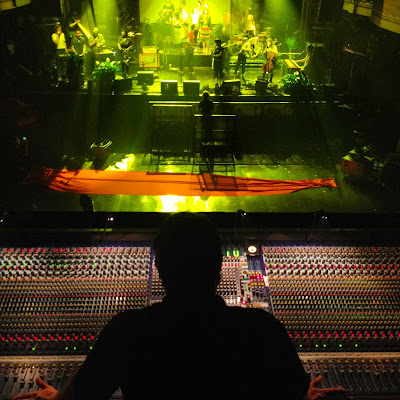 I just got home from Phase 3 of this tour with The Polyphonic Spree! They are a really great bunch of people/musicians. It's good to be home in the dome with the dog... already plotting plans for the rest of the summer. I'll keep you posted! I met a bunch of really friendly and interesting people out there on the road, I look forward to seeing them again soon.
Posted by Daniel Huffman at 8:07 PM No comments:

The Flaming Lips and Heady Fwends Vinyl Pouring Highlights 2012, a set on Flickr.

Posted by Daniel Huffman at 8:43 PM No comments:

Girl, You're so Weird

Here is that Flaming Lips collaboration I was talking about! It's on the album The Flaming Lips and Heady Fwends, due out on Record Store Day 2012! So Stoked!

Posted by Daniel Huffman at 8:37 PM No comments:

It's in my fridge (for the time being) and it's too weird to not document... 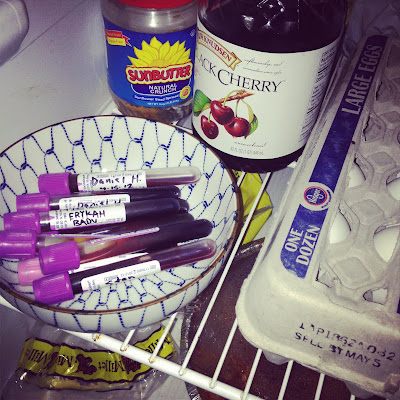 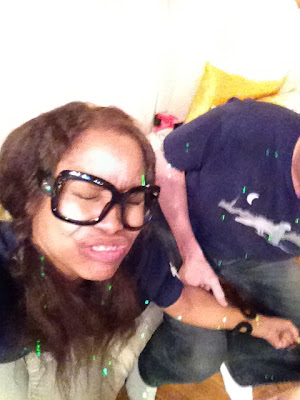 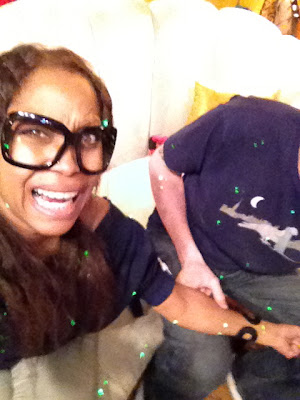 I gotta say, she is one cool, funny, sexy lady!!!
Super cool! Love! She took my phone and took these pictures of herself as my phlebotomist buddy was looking for a vein.
Posted by Daniel Huffman at 8:29 PM No comments:

Posted by Daniel Huffman at 11:21 PM No comments: 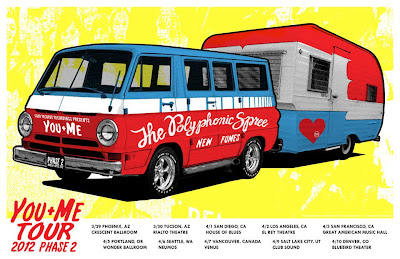 Well, I think it's coming out on Record Store Day. If all goes well, I'll be at Stan's A&R pouring the vinyl at the end of next week.
I will pour as many as I can of the 20,000 records before I go on tour again. I'm really excited about all of this!!! 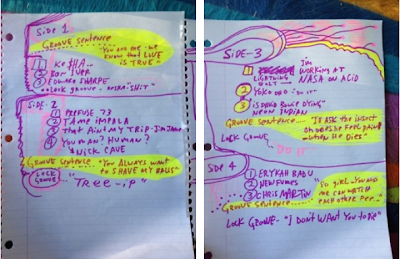 New Fumes Photo of the Week 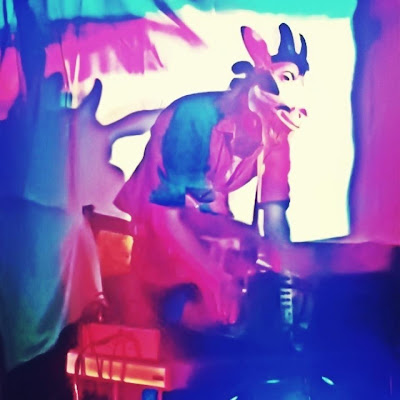 Photo by Benjamin Curtis (School of Seven Bells) taken at Crown & Harp in Dallas, Tx
Posted by Daniel Huffman at 11:59 PM No comments:

This is Only a Test

So sorry for the lack of posts, I'm a bad blogger...
I'll make it up to you with some news and updates!
2012 has been really fun and exciting for me so far!
It started by playing an after party on NYE for The Flaming Lips/ Plastic Ono Band New Years show. It was supposed to take place at THE WOMB, but it got moved to the OKC farmers market. Long Story. Wayne Coyne had asked me to do an "electric sockhop version" of 'Thus Sprach Zarathustra' by Richard Strauss, "with paranoid soundscapes". That piece of music is famous for being the theme music in "2001: A Space Odyssey". I worked on it day and night all the way up to the event! Stardeath and White Dwarfs did a tripped out jam version of Stravinsky's 9th symphony.
With the fire marshall closing down the Womb, it all seemed uncertain wether or not it was going to happen at all or if anyone would be there if it did... It ended up being a really good time!
The next week, I played a show in Tulsa and ended up crashing in Wayne's Pink Floor studio in OKC again. It smells like a tire shop (because of the pink rubber floor) , with a hint of cigarettes and cheeseburgers. True scents of progress! Haha!
Long story short: I ended up writing a song with Wayne, made by mashing up two instrumental tracks I made in the Dome in Dallas and having Wayne arrange and sing over it. We did it really quickly over a day and a half, then we made a video for the song the next day.
Total trip! I'll be posting the video whenever it comes out, for sure, if the internet doesn't censor it.
Here's a video test George Salisbury of Delo Creative did with me, just outside of the Pink Floor Studio... I hope George doesn't mind me posting this. I think it looks wicked!
George is a master!

More news to come!
Posted by Daniel Huffman at 10:47 PM No comments:

THE POLYPHONIC SPREE "YOU + ME" PHASE ONE TRAILER from Good Records Recordings on Vimeo.

Posted by Daniel Huffman at 10:33 PM No comments: 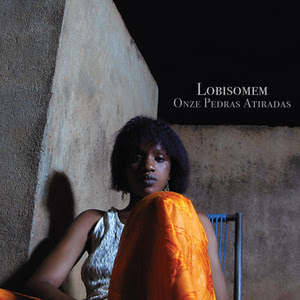 I am excited to be a part of this remix LP !!! My college roommate, Brad Loving makes some weird/ cool music as Lobisomem.
I had a blast "reimagining" one of his tunes and it's fun to be on this list of contributors!:::::::
Ben Vida (of BirdShow,Singer), M.Takara, Dan Bitney (Tortoise, Isotope 217), Bundy K Brown, DJ /Rupture & Chief Boima, Roberto Carlos Lange, Diamond Age, New Fumes, Totem Test, The Eternals, and Clive Tanaka remixes Lobisomem.
check it out! HERE
Posted by Daniel Huffman at 10:10 PM No comments: